Av-Comm supplied critical communications through installing a satellite ground station which provided a reliable and resilient internet connection to the launch site. Av-Comm supplied the equipment and mobilised a team of technicians to travel to the remote site and instal the system. The system was even used to live stream the first launch. If you saw a photo or video from the event, that content came from Av-Comm’s systems.

Owner of the Arnhem Space Centre, Equatorial Launch Australia (ELA) successfully completed three of its launches of NASA rockets in just 15 days from late June to mid-July. The first launch occurred on 27 June, and saw a BBIX rocket travel over 300 kms in space, carrying an atmospheric observation/sensing platform to help astronomers measure an unstudied part of Centauri A and B’s ultraviolet light spectrum.

Crucial to all successful space operations is the work on the ground. Av-Comm is very proud to have contributed to the ground segment of this project.

Space Industry Association of Australia CEO James Brown specifically called out Av-Comm’s work on the mission’s ground segment on ABC’s The Drum stating: “What kind of impact will this have for kids in the future? Knowing Australians worked on it. Australian technology, from a company in Brookvale here, Av-Comm Space & Defence.” 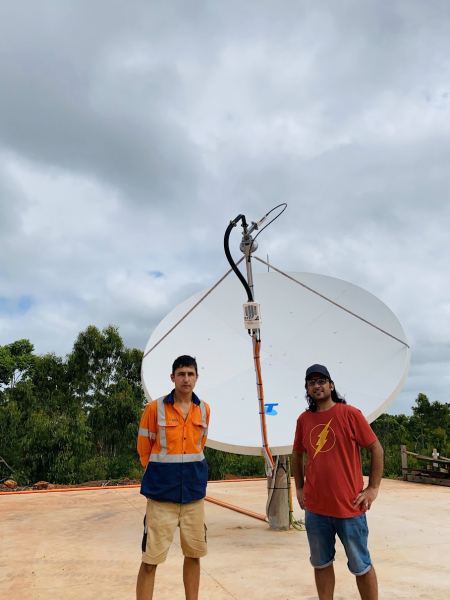 Av-Comm’s field engineers at the Arnhem Space Centre pictured
with a C-band receiver built by Av-Comm.